Hello from Ireland!
Our trip started off in rather alarming fashion this morning when we noticed our plane had propellors. Still, we survived the flight and arrived at Galway airport (more of a metal shed, to be fair) and found a taxi driver holding a sign saying"Massimo". Now, there is no Massimo in Late Night Gimp Fight. There never has been and there never will be. Still, when we approached the toothless driver and enquired if he was waiting for us he slurred "Are ye a band?" "umm... more of a comedy group" we nervously replied. "Whatever!" he shrugged, and we were on our way. And now Paul shall be referred to as Massimo for the rest of the trip. 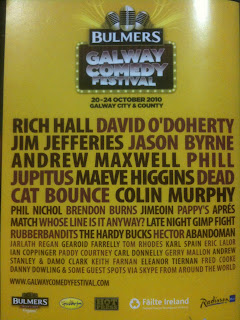 Myself, Lee, Matt and Massimo are here a day early as we're performing in a mixed bill show tonight with Phill Jupitus, Dead Cat Bounce, Karl Spain and Phil Nichol. We're doing ten minutes that'll hopefully pick up some audience for our shows tomorrow and Saturday. We're staying the first night in a hotel, which is absolutely lush. We have two suites, on two levels and three bathrooms in each. That's right, more bathrooms than guests. Richard and Matt Tizzle will join us tomorrow, provided they don't miss their flight.
We went for a pint of guinness and a wander round the town, which looks like a lovely place, and we had a look at the venues we're performing at. Tonight's at a posh 400 seater Town Hall Theatre and our own gigs are at a cool 180 seater music venue, called the Roisin Dubh. We're on at 11pm on Friday and Saturday, after Rich Hall.
Right- better be off for tonight's show now- we'll let you know how it goes. Stay tuned for more gimp updates from the Emerald Isle.
David.
Posted by Late Night Gimp Fight at 05:39