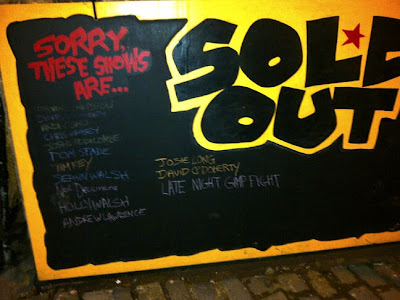 We had our second show last night and it was our first sell out, which was lovely.
It didn't feel like our best show as we were having some technical issues (the dreaded projector failure...) that needed fixing so we went up a bit late. We'd also swapped things around in the running order and we feel like we're still looking for the best version of the show and not quite found it yet. But that's what these previews are all about and after our last one tonight I'm sure we'll have the show locked down.
It tends to take about four or five performaces for us to hit our stride at the Fringe, but having full and enthusiastc houses is making things a lot easier. Most of these changes aren't things an audience would really notice, it's more about us tweaking and re-working until we feel like we've found the perfect version of the show, so we're doing it justice. Cos it is a show we're immensely proud of.
All this extra work means we still haven't seen any other shows yet, which we need to rectify as soon as we can as there's so many brilliant acts, old and new, that we're desperate to see this year. (Sheeps, Totally Tom, Colin Hoult, McNeil & Pamphilon, James Acaster... to name just a few).
Finally, a little plug. After tonight's show three of us are taking part in Lee's brainchild The Great Big Sketch Off which will be a fun, if under-rehearsed sketch comedy extravaganza. Tickets are still available if you fancy seeing your favourite sketch teams mixed up into random groups and given a day to come up with ten minutes of new material, or fall flat on their faces. Either way it'll be entertaining.
Hope to see you there!
x
Posted by Late Night Gimp Fight at 03:50