the calm before the storm

yesterday (the better looking) half of LNGF arrived in edinburgh. the flat we're staying in is a lot nicer than in previous years. this new level of luxury manifests itself in the form of a shower that actually works, a table to eat at in the kitchen and mattresses that don't feel like prison beds.

today was spent anxiously awaiting the arrival of this year's flyers and posters. for me personally (as i ordered them) this is always an angst-ridden, nervous wait in which i gnaw my nails to the bone worrying if the flyers will look any good, whether the posters were printed in the right size or indeed if they'll arrive at all. thankfully this year went without a hitch and 10,000 flyers and 200 posters are sat in our living room ready to be inflicted upon the people of edinburgh, after which they'll be inflicted upon the bin. 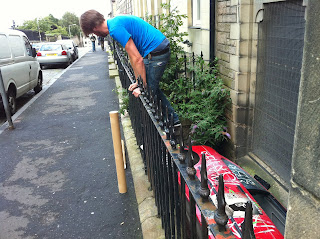 this afternoon matt and i headed out to put some posters up around town. the weirdest thing we saw when walking around was a car that had seemingly been lifted off the road, carried over the pavement and dropped into an alcove adjacent to the pavement. weirder still, if fitted perfectly into where it had been slotted as if a superhuman traffic warden had got creative when noticing an BMW M3 illegally parked one too many times. still, anything and everything is a potential publicity stunt at the fringe so i dutifully jumped over the railings and put a poster on the offending vehicle. job done. 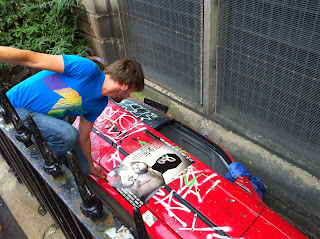 tonight we're cooking the first of what is certain to be far too many spaghetti bologneses throughout the course of the fringe and chilling out at the flat. we've got our tech rehearsal at the pleasance tomorrow night which is sure to be an interesting, if stressful three hours and then we open the following day so these few hours of calm before the storm well and truly breaks are not to be sniffed at.
we should probably mention where and when we're on, come to think of it. we're at the pleasance courtyard at 11pm every day from 4th - 29th (except 18th). you can even book tickets!
well, that's all for now. we're off to eat our (considerable) body weights in pasta. bye!
david.
Posted by Late Night Gimp Fight at 10:06