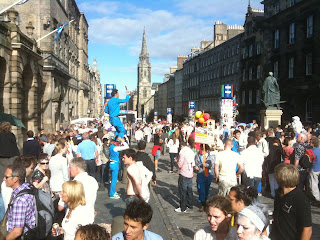 I thought about doing my blog in the third person again but thought its an artistic device I've already used and true performers should always push themselves to a new level... And I couldn't be arsed!

Instead Im gonna talk about some of my favourite moments from this years fringe and there have been a fair few of them so far!

Lets start at the beginning. Apparently that's a very good place to start. When we first arrived, Edinburgh was all fresh and new and shiny and not infested by students and comedians. It's a really beautiful city to just wander around and I'd highly recommend it. Come for the New Years.

Then the festival began and the show has gone really well thus far. The video stuff that took such a long time to do has gone down an absolute treat and made all the effort worthwhile. Result!

Seen some really good shows, highly recommend Adam Riches and Colin Hoult along with Bane and Mcneil and Pamphillon.

Now for the dirt.

Every morning Paul and I draw a picture on the steamed up bathroom mirror as a present for eachother. My favourite so far has been recreating The Human Centipede with a certain gimp and his mum and dad but im not allowed to mention his name...

On a similar subject of Richard, we had the Campbell-gate saga of one of this weeks blogs. No one is taking responsibility for writing the list of things Richard might be doing instead of writing. I can hold my hands up and say it wasn't me though I would have been proud of that one! Watch this space for further details...

Lying in bed this morning I heard the saga of the non flushing toilet as 2 fully grown men both tried to urinate at the same time with dire consequences. Quote from Tizzle "It's going on my leg!"

Too many chilli con carnes. We had one last night. It was hot. Very hot. We then did a show where we spend 5 minutes locked in laundry bags. You do the math.

Took a walk up the Royal Mile to see people flyering. It was everything I remember from when I was a student. Man lying on floor covered in flyers? Check. Man stood still as statue with flyers in hand? Check. Amazingly hot girls in stockings and basques, pole dancing with flyers in hidden places? Actually no. There weren't. But if there were I'd be watching that show for sure! In fact I'm gonna go write that show now. After I take this cold shower...