last night was fun. i snuck into the horne section, one of my favourite shows on the fringe, after our show. the horne section started a few years ago in the queen dome and you could see back then this was going to be a massive hit, so it doesn't surprise me at all that it's now filling the 700-seat venue the grand in the pleasance courtyard.

the show was going really well until half way through a fire alarm went off and we all had to be evacuated. no-one quite knew what was going on or what would happen but the band, desperate to keep the good times rolling dashed outside for an impromptu acoustic jam while the situation was sorted out. 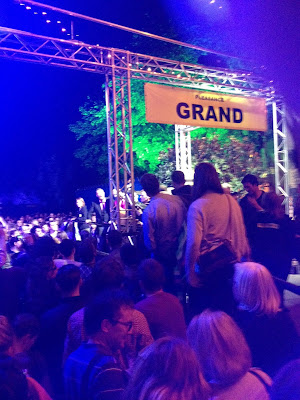 as you can just about make out in this photo alex horne and the band kept the spirit of the show going outside and everyone gathered round in the car park willing them on while the staff figured out what was going on. it was the last night of their run so they wanted to keep the show going and give everyone a good night, despite what was going on. it felt like one of those 'fringe moments' and it was great that the show was allowed to continue after the hiatus and pretty much everyone had stuck around.

the show was a triumph in the end, great sets from tim key, des bishop and piff the magic dragon made for a great night out. if you ever get a chance to see the show, make sure you do- it's such a great night out.


today we had to be up at a reasonable hour for an interview in support of our upcoming appearance at the brighton comedy festival in october. the interviewer was stephen k amos and we were being interviewed alongside james acaster and rob broderick aka abandoman, two of our favourite acts. stephen hadn't met us before so was understandably weirded out when we turned up with our gimp masks on (especially as half of us kept them on throughout the entire interview) but it all seemed to go without a hitch. the interview doesn't go out till october so we weren't allowed to mention what we were doing at the moment or anything edinburgh-related, which was also pretty odd, but we did get to support abandoman in a freestyle rap, which was another fringe highlight for us! 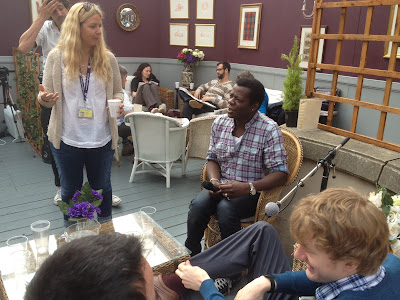 it'll be an early night after the show for us tonight. for tomorrow the longest weekend awaits....