this is what happened yesterday. 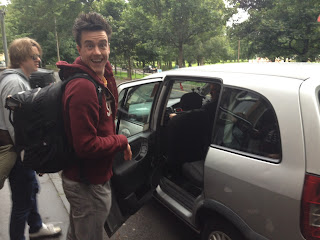 the alarm went off at the ungodly hour of 6.15am. ungodly by anyone's standards but at the fringe it's inhumane. cramming all our props and costume into our hand luggage we bundled ourselves into a cab to the airport. some people's spirits were higher than others, as you can see.

the taxi driver's accent was so strong we had one of those awkward conversations where you're only about 40% sure of what he'd said each time he asked a question. it's difficult to know what to do in this situation but we chose to vary our responses to each indecipherable question, choosing either "yeah i know", "umm... not sure" and just laughing, assuming it wasn't a question.

made it to the airport and checked in smoothly, almost too smoothly. (interesting fact- at NO point throughout the flights there and back were we asked to show any ID. just a boarding pass. is that normal?) a wetherspoons breakfast in departures hit the spot, if that spot was indigestion and a faint sense of regret. 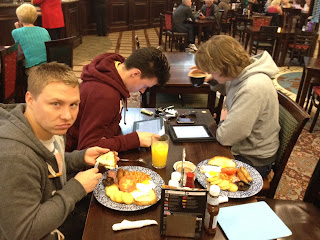 i'm a terrible flyer. i hate it. the other gimps provide no support whatsoever, in fact my catatonic fear only makes the flight more entertaining for them. also, we were forced to endure a canadian musical theatre group behind us reciting most of their god-awful back catalogue, another unwelcome addition to an already stressful experience. still, we survived the flight and touched down at heathrow at about half ten. 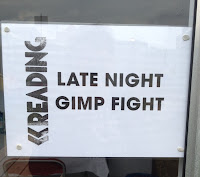 tizzle, our technician back home met us with a car at the airport and we were on the road to reading. after a month away from home there's something quite heart-breaking about being this close to home, but not being there properly, if you see what i mean.

anyway, we made it there with time to spare so we set up camp in our dressing room and ate miniature crunchie bars and drank tea, cos when you're at reading festival you've got to party hard. i even had a camomile.

when our time came we made our way to the stage. it was totally different from last year's last minute panic to get on in time, this time round we had a proper soundcheck and look around the stage as there was a break before we were on. the thing that really surprised me this year was how the tent was filling up as our stage time approached, we were getting a few cheers from the people in the crowd as we were soundchecking, it really felt like people had come into the tent to see us this year, which was really humbling.

this is the view from the stage a few minutes before we went on. we were told in the end there were about three and a half thousand people in there, which is mad. 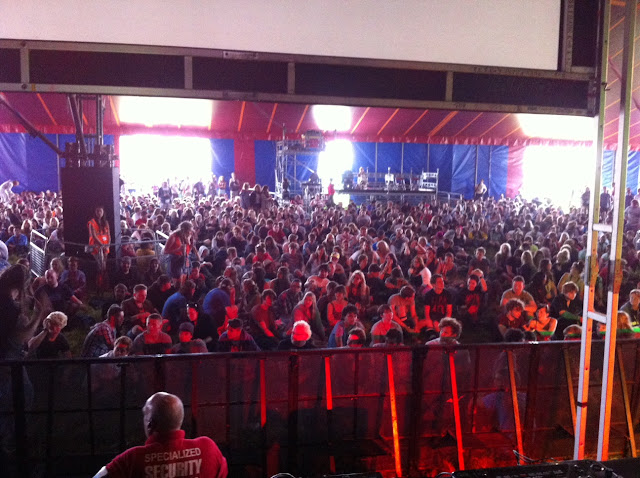 the gig itself went like a dream. at a festival you only bring out your 'big hitters' the sketches you know will work anywhere, the big numbers, the songs, and in our case, the strip. it's funny- you don't hear a laugh immediately like a normal gig, there's a few seconds delay while the sound travels from the back of the tent and then a wall of sound, be it laughter or applause, hits you and when it does, it feels fucking great.

after our set we hit up the artists catering tent to have our first non-battered food in a month and crucially, some vegetables, which was a rare treat. then it was on the road again and back to the airport. we had a quick nap in departures then it was time to board. we landed back in edinburgh just after 8, jumped in a cab and just about made it back to the pleasance courtyard in time for our show.

i was just walking to our venue when a stanger came up to me and announced "i have a question for you" ... assuming him to be drunk i gave him a worried smile and nodded then he said "how the hell did you get to reading and back so quickly" i laughed and realised he must've followed our tweets and said honestly, i'm not sure. but we did.

we were by this point, knackered. but luckily last night's crowd were bloody lovely and really kept our energy up through to the end.

we have today to recover some sleep, and then it's leeds festival tomorrow for more of the same!